Fred Karger, who is seriously considering running for President on the Republican ticket in 2012, spoke about his experiences as a political consultant, as an activist, and finally an openly gay man. He described his experiences in the presidential campaigns of Ronald Reagan and George H.W. Bush and the recent movement for gay marriage across the nation. In particular, he described the development of a series of advertisements featuring the victims of Willie Horton during the Bush campaign. After that, Karger began to discuss the policies behind his possible presidential campaign as an independent Republican. 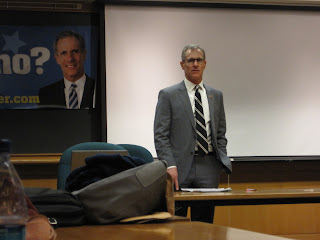 Karger emphasized the need for education and immigration reform. He believes that we need to ensure jobs stay in America while also confronting the fact that millions of illegal immigrants are in the United States. Finally, Karger announced that he wanted to be the first possible Republican candidate to propose that the U.S. Constitution should be amended so that 16 and 17 year olds can vote.  Students asked questions about his new proposal and his participation in previous campaigns. After responding to a few questions and discussing his proposed amendment in greater detail, Karger closed the event with a few remarks on the recently proposed bill that will prevent students from voting in New Hampshire.
— J. P. Harrington ’14

Posted by Rockefeller Center at Dartmouth at 11:37 PM